Superficial man bashes a bit, but not without a great example of the type a guy who meets it’s ideals.  Giermo has Tahzay to balance out his negative energy and Klashka will have a battalion of amiable former boyfriends to balance out the LA gang members in the KlashkaTse chapter of HipChick Comics. I was a tomboy during my formative years and most of my friends were boys. I must say that the experience must have spoiled me, because once my friends and I reached puberty, I was angered by the change in attitude most of the now testosterone charged boys had toward me.  Boys and men are much smarter and more wonderful than the chest thumping they display after puberty hits and some still are wonderful. Long live the wonderful ones. However, all women experience the beast laid bare in the form of the rheumy-eyed, sex addicted mass they have to service in marriage. Yet, they keep silent and accept duty to this demon as a caveat in a woman’s softer life. Bullshit, we are breadwinners and fight in wars. Patriarchy has no to use such antiquated chauvinistic excuses! With that said, there are issues I’ve experienced that I want to write about. I will strive to be as responsible as possible, but  won’t mince words. I feel it’s a disservice to dance around this issue: the act of conquest that sex is under the duress of marital rights. It’s rarely addressed head on and when it is, it’s stifled by Patriarchy and the Patriarchal Feminine who plug their ears and babble. European literature doesn’t prance around the issue. Writers like Emma Donahue do not sugar coat sexual reality. More famously, the soap opera: The Forsyth Saga was daring enough to depict the protagonist exercising his marital rights by force on his reluctant wife—and opened it to debate! The Chinese are my favorite authors on the subject for who can forget The Butcher’s Wife by Li Ang. Americans are too puritanical to cover such a subject, save a handful of authors of a long suffering demographic who I guess felt they couldn’t sink any lower if they could. The African-American experience in Jim Crow South in the 1930’s was stripped raw by author Alice Walker who gave us the Color Purple. The Color Purple is a story of a woman who was sold into marriage where her husband beat her for not being the woman he really wanted. To add insult to injury, when the abusive husband felt he couldn’t dominate in the realm of men, he would compensate for his defeat by administering sex as an act of conquest on his hapless wife.

This is happens in more marriages than we know… You would think that the 70’s women’s movement has freed women from undertaking bad marriages, but as it turns out, the changing economy is such that both men and women need each other just to pay a mortgage. San Francisco is not the most romantic city in the country so claimed by its tourism board. People are coupled in order to pay rent. Just across the Golden Gate Bridge, Marin county has the highest divorce rate in the country, largely in part because women induce divorces to free themselves of their husbands and attain the house. Yes, Superficial has little tolerance for gold diggers as well, so personified by followers of Hera, goddess of marriage—no matter how a woman attains the status. Women’s dependence on men due to the income cap or greed has given men a huge imbalance of power in their favor in marriage. So much so, that power has festered into toxic masculinity and the expectation that sex is owed to them because they pay the largest bills. To really make a girl’s skin crawl, the only incentive to marry for a great deal of men is consistent sex. If you still don’t feel me, shove Jon Hamm as your potential husband out of your head and replace him with a dude bro general from the film Dune? Imagine you are forced to marry “that” for survival. You get it now? Good, let’s move on.

I am angry that women have to provide something extra to cohabitate. We pay half the bills. We’re half of an economic unit. Why can’t a power couple, be simply that? In some partnerships, that is actually true, but there’s a requirement: the woman needs to come from a wealthy family. Fear of a powerful father scares respect into his daughter’s husband. If hubby has a bad day of work, he takes his erection-of-rage to a mistress of a lower class or different race. His upper crust wife is safe from his passions and curls up with a glass of wine and a good book to take the edge off her day.

Second best is never enough. You’ll do much better, baby, on your own!

The lower class mistress’ story is rarely told. That is unless you follow horror films.

Jasian Genetic will have a subplot of what happens to girls who are unprotected. Fatherless girls lives are nearly often ruined by sodomy. Soleil narrowly escapes being sold off into a green card marriage by her stepfather who impregnates her.  Yeah… when a wife with an adolescent daughter refuses sex to her husband, he doesn’t look very far for other “resources”. While there are plenty of nice men in the world I insist on exposing those who can’t control their insatiable libidos. For those women who can not attract the nice guys, my addressing this issue in a story will hopefully bring them comfort and raise awareness to their plight. Marital rape is illegal, but rarely enforced because the woman is financial dependent on the man in the center “flyover” states, or she’s part another underserved demographic. The #metoo movement does not cover toxic marriages yet, so there is little support for the daughter who arrives home after school to find her stepfather is home from work early…  Soleil escapes through education. What about the girls who fall through the cracks?

Love is valiance. Marriage is the partnership of a couple who function as an economic unit. A married couple is not going to have sex forever, but they both will have to keep the wolf away from the door for the rest of their lives. That is so long as love exists between them, hence the reason the wife services the husband and feels threatened when he cheats. Let him fuck with his concubines, so long as you remain Sultana! It’s less work for you! Sex is part of love, but does not embody it. Sex is a biological need for men, whereas women only desire it.. Men are empowered  by sex. A woman loses power depending on context. Therefore, she seeks authority through her work and in the home. A woman who loves will vie to ensure that her partner and offspring’s survival. That’s her priority. A bad husband grouses, “All is fine until she brings the baby home. The bad husband is resentful because HE used to be the child. It would very nice if the husband would get a clue and stop being another child to “care for” and set aside his biological need until the time is right for both bodies. We still have a ways to go to reach that point in this crazy contract Hera dreamed up with her philandering brother. 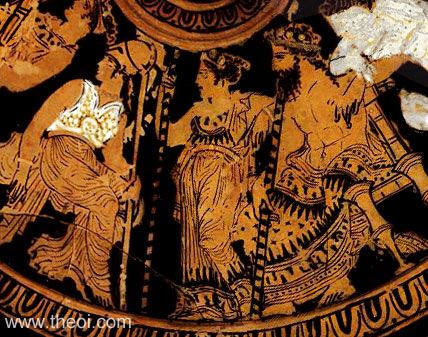